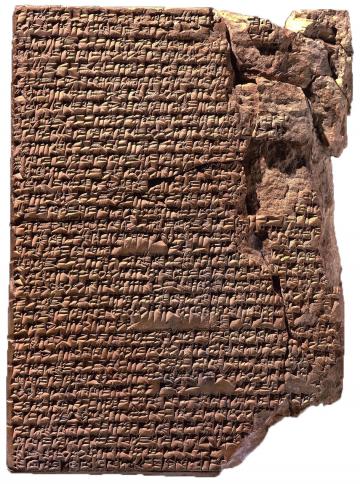 Akkadian was the principal language of ancient Mesopotamia (approximately corresponding to modern Iraq). It was spoken by the Assyrians in the north and the Babylonians in the south and survived as a written language until the 1st century AD. Akkadian was also used as an international diplomatic language in the Late Bronze Age in an area stretching from modern Turkey to Egypt and from the Levant to modern Iran.

Akkadian is the world’s oldest written Semitic language and the first connected texts (in Old Akkadian) date from about 2400 BC. It was written in cuneiform (wedge-shaped) script, which developed from a pictorial forerunner first attested in the area in c. 3300 BC. Most cuneiform texts were written with a reed stylus on clay tablets but other media include stone, metal, and waxed writing boards.

Akkadian may also be studied for six terms within the two-year MPhil in Cuneiform Studies. This graduate degree has a range of options and is designed for those new to the field and those who have previously studied cuneiform.