Digitization Project of the Inscriptions of the National Museum of Iran

The National Museum of Iran (NMI), in collaboration with the Cuneiform Digital Library Initiative (CDLI), have presented their efforts to digitize and disseminate all available documentation on NMI’s extensive cuneiform collection here.

The NMI houses collections of 300,000 historical artefacts. The cuneiform collection, consisting of documents from the fourth millennium BC to the first century AD, is among the most comprehensive in the Middle East, containing clay tablets, bricks, and stones bearing ancient texts written in proto-Elamite, Elamite, Sumerian, Akkadian, Urartian, and Old Persian.

The “Digitization Project of the Inscriptions of the National Museum of Iran” is a joint effort of the CDLI and the NMI. The project was first proposed by Jacob Dahl from the University of Oxford, and Jebrael Nokande, Director of the National Museum of Iran, during a two-day Tehran workshop in May 2016 that was dedicated to the digitization of cuneiform tablets, followed by a Proto-Elamite reading group held by Professor Dahl. The first group of Proto-Elamite tablets were scanned and digitised in January 2018 by Oxford staff member Parsa Daneshmand, in cooperation with the Head of the Tablet Department, Simin Piran, and assisted by Yeganeh Sepideh. 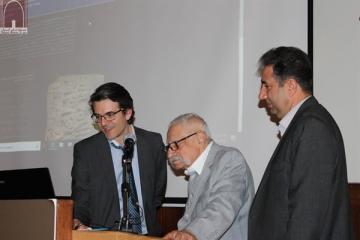 Professor Dahl, Dr Arfaee, and Dr Nokandeh launch the CDLI webpage of the
National Museum of Iran at an event in Tehran on May 6 2018.

They hope to complete the collaborative capture of all NMI texts by the summer or fall of 2019.