An exhibition on LGBTQ+ history from the British Museum, based on Professor Richard Bruce Parkinson's research will tour the UK, and has opened in the Ashmolean as ‘No Offence’. This free exhibition includes artefacts from a wide range of cultures, from 9000 BCE to the present day. It is accompanied by web trails around the exhibition, around GLAM collections and around Oxford itself, as part of Torch’s ‘Oxford Alternative Stories’ app.

The exhibition was inspired by Richard Parkinson’s book A Little Gay History: Desire and Diversity Across the World, and he was consultant both for the exhibition when it was first held at the British Museum in 2017 and for the Oxford exhibition. Later this term he will give a seminar on the practical issues of ‘Displaying LGBTQ+ Histories in the Museum: Possible Aims and Strategies’ for the Oxford Queer Studies Network.

The Oxford exhibition also includes a film-script lent by the Oscar winning film-maker James Ivory (of Merchant Ivory Productions), who will be in Oxford as Torch visiting professor, hosted by The Queen’s College; there will be two public events, in conversation with academics, including Richard Parkinson. Please click here for more information. 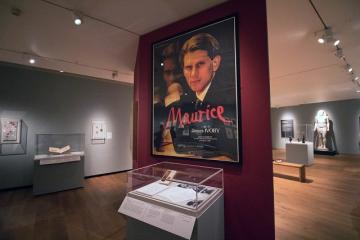 All are welcome to attend.