Authorship, originality and innovation in Tibetan Scriptural Revelations: A case study from the Dudjom Corpus 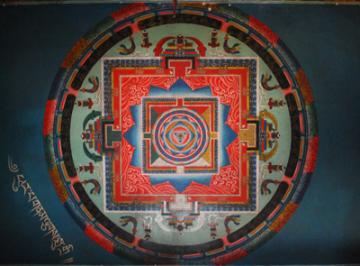 Our project revolves around the popular and influential rNying ma or Ancient school of Tibetan Buddhism.  Among other things, rNying ma is unique in emphasising ongoing revelation of new scripture. In rNying ma, Buddhist scripture is not merely something once heard from the Buddha in bygone times and passed down through the centuries: it is also something continuously added to in the present, through fresh revelations granted to qualified persons. These revelations are known as gter ma, meaning Treasure, a term related to the Sanskrit notion of nidhi.

A widespread feature of the scriptures of Mahāyāna and Tantric Buddhism in India and China is that they appeared centuries after the Buddha's death, so that their idiom, language and imagery do not directly reflect the culture of the Buddha's time. We also know that they were often produced using variants of the Treasure system. A close examination of the later rNying ma Treasure system shows it to be carefully modelled on these much older Indian and Chinese precedents. So one of the interesting features of rNying ma is its continuing keenness for a revelatory system once widespread but now found nowhere else.

While one might expect ongoing scriptural revelation to be innovative, rNying ma Treasure is in fact strikingingly conservative. Despite the colourful personalities of individual treasure revealers, and the sometimes dramatic public displays accompanying revelation, finished Treasure works are faithful to age-old tradition. They are also typically long and complex, filling many volumes with dense technical writing seamlessly harmonised with existing learning.

How is this achieved?  Are all treasure revealers geniuses like Mozart or Shakespeare, extemporaneously revealing perfect cultural artifacts of immense complexity?  In a few cases, Treasure works may indeed be complex from the outset and produced through inspired genius, but more typically, they may begin as rather concise "root" Treasure texts, which expand over time, developed further by the visionary revealer himself, and often later by further lamas of the tradition.  Our project is exploring these developmental processes.

Treasure revelation thus brings us full circle back to the question of authorship in Buddhism. The very term 'author' can be misleading here, if used to mean a creative individual whose original output defines a work. Readers of Buddhist literature are familiar with its repetitions of phrases, sections, literary structures, and even entire chapters, across different texts, common even where they have ostensibly different authors.  Some modern scholars denounce this as mere 'plagiarism', which for traditional Buddhism misses the point entirely. Others over-compensate in asserting originality, innovation, and sceptical inquiry within the literature, but they have also missed the point, because although such values do show themselves, they occur against an established backdrop of quite different literary norms.

What are these norms? Firstly, Buddhist religious literature, including Treasure, is often (though not always!) collectively rather than individually produced: works may acquire the input of more persons than the nominal 'author' or 'revealer', extending backwards (and forwards) over time. Secondly, much is recycled, within a literary culture that normatively envisions contributors as tradents rather than innovators: in other words, producers of texts see themselves as passing on existing valued knowledge, rather than creating new knowledge from nothing, and this applies as much to visionary revealers of wisdom apparently taught previously by an enlightened buddha of a bygone age, as to scholars compiling the works of previous generations of lamas.

Treasure texts can be substantially modified by other hands in subsequent re-publications, while still retaining their original authorial or revelatory attribution. Or modification can be generated more silently via the subtly transformative effects of memorisation: scholars memorise huge tracts of literature which they can access instantly at will, but which might re-emerge slightly transformed. So Buddhism can take authorial or revelatory attributions as conventional shorthand for a presiding spiritual authority in a given literary instance, rather than an individually creative literary agency. All this bears little resemblance to modern literary ideals, yet despite a vague general awareness of such differences, Tibetologists have never systematically addressed the issue, and we now have numerous detailed studies of works attributed to famous Tibetan authors or revealers, without further investigation into what such attribution might actually entail. A detailed analysis of Tibetan authorship is therefore called for.

We are approaching this through minute examination of the literary processes found in the Dudjom tradition texts on the tantric deity Vajrakīlaya.  In particular, we focus on the productions of a famous twentieth century scholar and Treasure Revealer, the late Dudjom Rinpoche (bdud 'joms 'jigs bral ye shes rdo rje, 1904-1987), and those of other lamas of the lineage. Dudjom Rinpoche had his own Vajrakīlaya revelation, and also contributed to the revelatory traditions of his predecessor, Dudjom Lingpa (bdud 'joms gling pa, 1835-1904), as well those of several other famous lamas.  Apart from the complexities of the relationship between the tasks of scholarly editing and of visionary production in a case like this, there is also the added issue of personal identification between the authors where we are considering the productions of lamas linked in a recognised rebirth line. Given Dudjom Rinpoche's self-identification and public recognition as Dudjom Lingpa's rebirth, in his works on Dudjom Lingpa's Vajrakīlaya, Dudjom Rinpoche might be considered merely to have been re-working his own legacy.  Furthermore, they are both considered to be emanations of the seventeenth century Dudul Dorje (bdud 'dul rdo rje, 1615-1672), in whose tradition Dudjom Lingpa received his primary training, and who also had a Vajrakīlaya revelation, evidently connected with those of his two later rebirths.

Our project is also examining Dudjom Rinpoche's development of the early twentieth century Vajrakīlaya revelation of Zilnon Namkhai Dorje (zil gnon nam mkha'i rdo rje), who was one of his main teachers, and his work on the revelation of another of his teachers, Drakngak Lingpa (drag sngags gling pa).  Furthermore, we are looking at Dudjom Rinpoche's contributions to famous Vajrakīlaya revelatory traditions of the past: for example, that of the thirteenth century Guru Chöwang (guru chos dbang), and that of Bhutan's national saint, Pema Lingpa (padma gling-pa, 1450-1521), following Dudjom Rinpoche's invitation to Bhutan to edit and extend them.  Dudjom Rinpoche also compiled and edited the collections of transmitted non-revelatory teachings (bka' ma) on Vajrakīlaya and these too impacted on his other work.

Our findings so far indicate that while remarkable individual feats of memory and intellect can play a significant part in Treasure revelation, they do not have to. Treasure discovery is not necessarily an act of individual virtuosity: it can equally involve traditionally sanctioned processes of communal authorship. While some Treasure Revealers were indeed celebrated scholars endowed with the huge repertoire of memorised texts that Tibetans consider the hallmark of learning, others were not, and depended on others to bring to literary fruition the texts of their revelations. The individual treasure revealer's contribution is embedded within a discreet but clearly defined cultural framework enabling the required intellectual effort to be dispersed over time and between different persons. This has not been researched so far, and understanding it is important to our project.

In some cases, re-presentation of a previous generation's tantric practice may be more a matter of bringing the textual tradition fresh blessings or consecrations from the tantric deities, while in other cases, significant modifications and re-workings of the visionary imagery are involved.  Sometimes changes in and expansions of earlier work may involve systematising and bringing consistency to them, or creating versions more amenable to convenient meditative and ritual practice.  Other cases demonstrate an interest in universalising a rather idiosyncratic revelation, by bringing its practice into line with more widely familiar ritual conventions, or perhaps more radically, integrating material from previous revelations or the transmitted tradition. In other cases again, there may be no obvious rationale behind innovations, apart from the spiritual vision of the new lama.