China is now one of the world’s largest exporters of capital, a first in modern history for a non-democratic state.

The China, Law and Development project (CLD), which started in January 2019, is a 5-year, interdisciplinary and multi-sited research project that aims to understand the nature of order that underlies China’s new globalism, an order that is contingent on multiple sources, one of which may be law.

This project breaks new ground in analysing Chinese approaches to ‘law and development’ in recipient or host states in emerging economies, including its activity in international legal, development, and financial organizations. The research emphasizes a rigorously empirical design with the aim of providing neutral academic analysis on one of the most important questions of the twenty-first century: what does China’s role in the law and development field mean for the world?

Research is also considering the implications of the COVID-19 pandemic, as states’ responses transform the world by freezing and rerouting global supply chains, blocking the movement of peoples, and shifting national alliances. Different political systems and models of governance, whether democratic, authoritarian, or in-between, are all responding to the socio-economic crisis. Whereas, until very recently, China was poised to be the champion of economic globalization, the pandemic has significantly altered the landscape of global trade, investment, and humanitarian aid. As the world enters a new stage of recovery and regrowth, the study of how China is engaging with developing countries and international organizations has never been more vital.

Comprised of a team of scholars from law, anthropology, sociology, political science and development studies, the CLD project is generating empirical data and analysis on the two-way interaction between Chinese investors adapting to different regulatory environments in host nations and host nations adjusting to the new norm of Chinese outbound capital, including investment, loans, and aid. 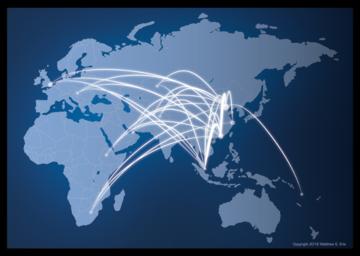 Case studies are being carried out in Southeast Asia (Vietnam), Central Asia (Tajikistan), Africa (Ethiopia), and South Asia (Pakistan), with complementary micro-studies being conducted in countries such as Vanuatu, Afghanistan and Hungary. In addition, a number of invited early career scholars in China and host states are contributing Research Briefs to the project which summarise their on-going research on legal and regulatory issues related to Chinese outbound capital.

Professor Matthew Erie leads the CLD project which is funded by the European Research Council (grant 803763).