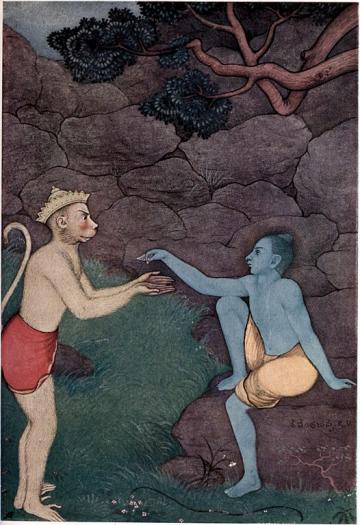 In the first part of the course, lasting five months, you will make an intensive study of the essentials of the Sanskrit language. There will be daily homework exercises as well as memorization of aspects of Sanskrit grammar and vocabulary. At the same time you will attend a class on methods in the study of classical Indian culture, attend lectures and seminars, and write several tutorial essays related to general themes in Indian religion.

Following successful qualifying examination at the end of the first year, you will enter the second part of the course, which continues to the end of the second year. You will have regular classes in reading Sanskrit texts. For these classes you will prepare texts in advance and, along with your classmates, will read and translate them into English. Your classes will cover prescribed lists of texts that belong to two Indian religious traditions, which you will have chosen from among four options: Shaiva, Vaishnava, Buddhist, and the mainstream tradition that derives from the Vedas. You will also be given regular tutorials in these two traditions, for which you will read assigned secondary sources and prepare essays to discuss with your tutors. There are also lectures and seminars regularly offered. Students who come to Oxford with a significant background in Sanskrit may with permission attend advanced classes, or other language classes offered at Oxford, though they will not be explicitly examined in these languages. All students are encouraged to attend lectures both in the Faculty and elsewhere in the university, as their work permits and their interests dictate.

Many graduates have also undertaken further research into subjects linked with Asian and Middle Eastern studies and have pursued successful careers in the academic world, education and in museums.

At the end of the first year of the course there is a written examination of your ability to translate prepared texts in Sanskrit and of your knowledge of Sanskrit grammar. In the second year, there is a timed examination in the textual component of the course. This paper has two halves, one for translation of portions of texts that you have read during the course, and the other for translation from comparable sources in Sanskrit that you have not read before in a class. There are also two timed examinations on the history of classical Indian religion, with the subject matter divided more or less chronologically. In these papers you will write essays in response to questions posed on topics covered by your tutorials.

There will also be a take-home paper due at the end of Trinity term in Year 2. You will be given a question based on your chosen areas and thesis topics that requires you to demonstrate a critical appreciation of different methods of studying Indian religious texts.

In addition to the three timed examinations and the take-home paper mentioned above, you will either have to sit for a fourth timed examination, on approaches to the study of Indian religion, or to write a thesis. In practice most students choose the latter option. It is usual to write the thesis mostly during the vacations, and it has to be handed in at the beginning of the final term. Tutors will discuss the choice of topic with you and supply a bibliography, and may criticise a first draft, but the final version of the thesis is entirely your own work. If you are subsequently admitted for a research degree, a successful MPhil thesis may form the basis of your doctoral dissertation.

Further information on the course, and the examination process, can be found in the course handbook here (information is current for the academic year of publication).

Oxford is home to an outstanding range of library and museum collections that provide invaluable resources for the study of India.

The Bodleian Library houses one of the largest and most significant collections of Sanskrit manuscripts in the world, outside of India. The Indian Institute Library, now housed in the Weston Library, holds more than 130,000 titles, one of the most substantial collections of books for South Asian studies available in the UK. The Weston Library also houses the Bodleian's Special Collections, including its Sanskrit and Tibetan manuscripts. Open-stack access to the research core of the Indian Institute collection is available through the Charles Wendell Davis Reading Room, located on the top floor of the Weston, with commanding views of Oxford's old academic quarter.

There are also extensive collections pertaining to India in the Nizami Ganjavi Library at the Faculty of Asian and Middle Eastern Studies, the Sackler Library, and several of the colleges (especially Balliol, Wolfson, and St Antony's). The Bodleian Law Library has extensive holdings related to law in India, with a primary focus on the laws of the Indian republic, rather than pre-1947 colonial legislation. The Indian collections of the Ashmolean Museum are of international importance, and its coins, paintings, prints and textiles offer wider insights into some of the formative cultural influences operating in the subcontinent in the centuries when its modern languages were emerging. The Museum of the History of Science has a unique collection of Indian scientific instruments, and the Pitt Rivers Museum comprises a collection of well over 15,000 items, covering most aspects of the daily life of Hindus, Muslims, Sikhs and Buddhists.

In addition to this, there are a number of other specialist library collections in Oxford that focus on Asian and Middle Eastern studies, such as:

You will also have access to the University's centrally provided electronic resources, the department's IT Officer and other bibliographic, archive or material sources as appropriate to the research topic. There is a computing room for the use of graduate students in the Faculty of Asian and Middle Eastern Studies, as well as a common room where tea and coffee are available and staff and students can meet.

Applications received for this course by the January deadline will also be considered for funding if applications fulfill the eligibility criteria. Please use the University's fees, funding and scholarship search tool to find what funding you may be eligible for.

The Faculty has a number of scholarships and funding opportunities across a wide range of subjects. Please see here for a list of these opportunities.