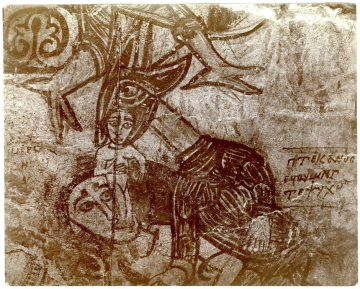 Coptic, the fifth and final recorded stage of the ancient Egyptian language, was the language of Christian Egypt. The earliest known Coptic texts date to the 3rd century CE; they had forerunners in pagan ‘Old Coptic’ of the 2nd century. Coptic died out as an everyday spoken language during the Middle Ages, but is still employed today in the liturgy of the Coptic Orthodox Church.

Coptic as a subject is of interest not only to Egyptologists, but also to students of Late Antiquity, Byzantine Studies, Theology and Religion, Church History, Papyrology, and the History of Law and Medicine. The range of texts read in the undergraduate Coptic course is very wide, and includes several dialects in addition to Sahidic, which is the most well attested, such as Akhmimic, Bohairic, and Fayumic. The course encompasses original Coptic documentary texts, including wills, contracts, deeds, and other legal documents, receipts, pleas for assistance to officials, and private letters, as well as magical and medical texts. We also read Coptic translations of Old and New Testament books, Apocryphal works, and the writings and biographies of eminent monastic figures. Although Coptic is closely associated with Egyptian Christianity, it also preserves substantial numbers of Gnostic and Manichaean works, and a representative selection of these is studied. The span of time covered by this material is roughly the 4th century to the 10th century CE.

Coptic is studied by undergraduates in Oriental Studies, especially Egyptology, and in Classics, and by graduate students in a wide range of subjects across the University including Theology and Religion, Classics, and History.