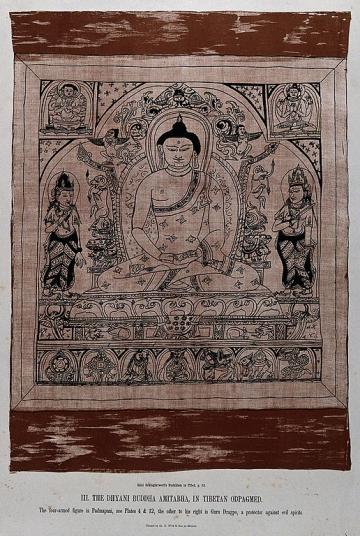 Tibetan belongs to the Tibeto-Burman language family, which some linguists treat as a branch of the Sino-Tibetan language group. The Tibetan language and its dialects are spoken primarily by ethnically Tibetan peoples, who live across a wide area of eastern Central Asia bordering the Indian subcontinent, including the Tibetan Plateau and the northern Indian subcontinent in Baltistan, Ladakh, Nepal, Sikkim, and Bhutan. Classical Tibetan is the major literary language, particularly for its use in Buddhist literature, but also in other types of literature.

Tibetan is written in an alphabet derived from an Indian alphabet of the Gupta era. Since the orthography has not changed significantly since the 7th cent. CE, students of Tibetan can easily read texts composed over a period of more than a millennium once they have mastered the writing system and the grammar. Spoken Tibetan has developed into a language with two tones (high and low) in some areas, including Central Tibetan and Khams, while other varieties (such as Amdo Tibetan or Ladakhi) are without tone. The Central Tibetan language (the dialects of Ü-Tsang, including Lhasa), Khams Tibetan, and Amdo Tibetan are considered to be dialects of a single language, especially since they all share the same literary language, while Dzongkha, Sikkimese, Sherpa, Ladakhi, and Balti are considered to be separate languages. Tibetic morphology can broadly speaking be described as agglutinative.

The Tibetic languages are spoken by some 8 million or more people. With the worldwide spread of Tibetan Buddhism, the Tibetan language has spread into the western world and can be found in many Buddhist publications and prayer materials, with some western students learning the language for translation of Tibetan texts. Outside of Lhasa itself, Lhasa Tibetan is spoken by approximately 200,000 exile speakers who have moved from modern-day Tibet to India and other countries. Tibetan is also spoken by groups of ethnic minorities in Tibet who have lived in close proximity to Tibetans for centuries, but nevertheless retain their own languages and cultures.

At Oxford, both literary and spoken Tibetan can be studied as part of the two-year MPhil in Tibetan and Himalayan Studies. For advanced students it is also possible to do Tibetan as part of the one-year MSt in Asian and Middle Eastern Studies. At undergraduate level, Tibetan can be taken as a subsidiary language for the BA in Japanese, Chinese, and Sanskrit, as well as the joint degree in Asian and Middle Eastern Studies & Theology and Religion.