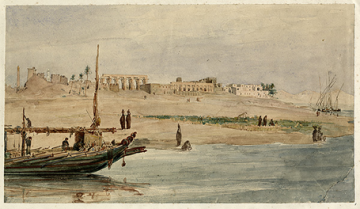 The Topographical Bibliography of Ancient Egyptian Hieroglyphic Texts, Statues, Reliefs, and Paintings is one of the longest-running and largest research projects in the humanities in the University, or indeed outside it. The undertaking originated in the 1890s, under the overall direction of F. Ll. Griffith, who was appointed the University’s first Egyptologist at the beginning of the 20th century, later becoming Professor. It is the central project of the Griffith Institute, which was founded with the legacy of Griffith to the University.

As a research conspectus, the Topographical Bibliography provides a fundamental, universally recognised point of departure for research on Egyptian artefacts and sites, most of which still await full publication. It offers comprehensive published and unpublished information about inscribed monuments and artefacts, including architecture, iconography, texts, attributions, and datings alongside the bibliographical data.

The project is also a vital conservation resource. For example, for some sites, much of the ancient setting can only be modelled through sources in archives and in publications of the eighteenth to early twentieth centuries that recorded places before the enormous changes of the last 150 years. The Topographical Bibliography gathers, orders, analyses, and presents such material, and the staff ensure that the Archive holdings of the Griffith Institute are intensively researched before being made available.

The project has published eight original volumes with three major revisions, in a total of sixteen books It is now undergoing major development toward online provision: The Digital TopBib. This is supported through synergies with the Online Egyptological Bibliography, the second major project of the Griffith Institute. Research for the Topographical Bibliography consolidates all relevant information about sites and monuments into forms that can be displayed online and searched, and incorporates archival materials, alongside museum records and print publications, into the considerable open access network of resources which the Institute offers.