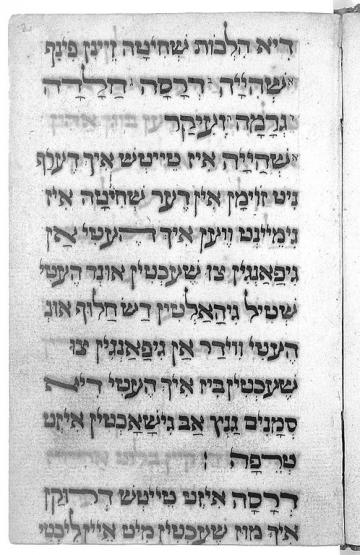 Yiddish (ייִדיש, יידיש or אידיש) is the historical language of the Ashkenazi Jews. It originated during the 9th century in Central Europe, providing the Jews with a Germanic-based vernacular fused with elements taken from Hebrew and Aramaic, as well as from Slavic languages and traces of Romance languages. Yiddish is written with a fully vocalized alphabet based on the Hebrew script. Prior to the Holocaust, there were over 10 million speakers of Yiddish; 85% of the Jews who died in the Holocaust were Yiddish speakers, leading to a massive decline in the use of the language. It is, however, used in a large number of Orthodox Jewish communities worldwide and is the first language of the home, school, and in many social settings among many Haredi Jews, and is used in Hasidic and Lithuanian yeshivas.
Yiddish can be taken as part of Hebrew and Jewish Studies undergraduate and graduate degrees, and informal classes at all levels take place at the Centre for Hebrew and Jewish Studies in the Clarendon Institute Building in Walton Street.