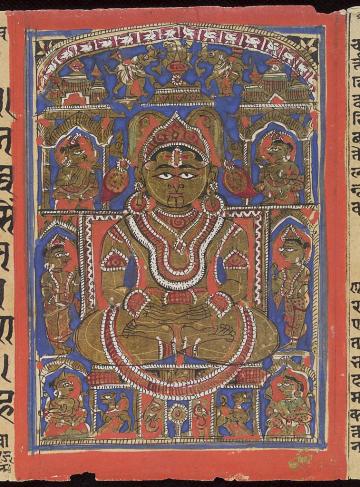 The Prakrits were Middle Indo-Aryan languages spoken between about 500 B.C. and 500 A.D. The name Prakrit (prākṛta) means ‘derived’, a name contrasting with Sanskrit (saṃskṛta) ‘complete, perfected’, reflecting the fact that the Prakrit languages were considered historically secondary to, and less prestigious than, Sanskrit.

The oldest stage of Middle Indo-Aryan language is attested in the inscriptions of Ashoka (ca. 260 BCE), as well as in the earliest forms of Pāli, the language of the Theravāda Buddhist canon. The most prominent form of Prakrit is Ardhamāgadhı̄, associated with the ancient kingdom of Magadha, in modern Bihar, and the subsequent Mauryan Empire. Mahāvı̄ra, the founder of Jainism, was born in Magadha, and the earliest Jain texts were composed in Ardhamāgadhı̄.

The other main Prakrit languages include Māhārāṣṭrı̄, Śaurasenī, Māgadhī, and Avantī, used in dramatic literature and lyric poetry, and Gāndhārī, a far North-Western Indo-Aryan language once used extensively as a language of Buddhist literature in Central Asia. The latest Middle Indo-Aryan period is represented by the Apabhraṃśas, used as literary languages from around the 8th century A.D. well into the second millennium.

Ardhamāgadhı̄ and some other forms of Prakrit became learned, literary languages, much like Classical Sanskrit, but at the earliest period originated as either genuine vernacular dialects, or as lingua francas based on such dialects. It was these vernacular dialects which ultimately developed into the Modern Indo-Aryan languages spoken across South Asia today.

Currently there is no independent degree in Prakrit, but it is offered as a subsidiary language for the BA in Sanskrit. Students will study Prakrit language and literature, as well as the doctrine and early history of Jainism. Students on graduate courses in Indian Studies may also attend Prakrit classes when these are offered.