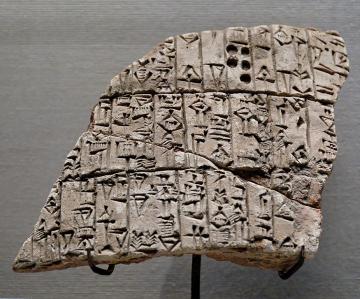 Sumerian was a language spoken in Southern Mesopotamia since the end of the fourth millennium BC. It was gradually replaced by Akkadian as a spoken language in the beginning of the second millennium BC, but continued to be used as a sacred, ceremonial, literary and scientific language in Mesopotamia until the first century AD.

Sumerian may be offered as a second language within the BA in Egyptology and Ancient Near Eastern Studies. You can apply for this BA through any of the following UCAS codes: Q400 BA/Egy; Q402 BA/ANES; or Q401 BA/EANES. Sumerian is studied for six terms, starting in the second year of the degree. No prior knowledge of Sumerian is expected at undergraduate level.

Sumerian is also studied for between three and six terms within the two-year MPhil in Cuneiform Studies. This graduate degree has a range of options and is designed for those new to the field and those who have previously studied cuneiform.