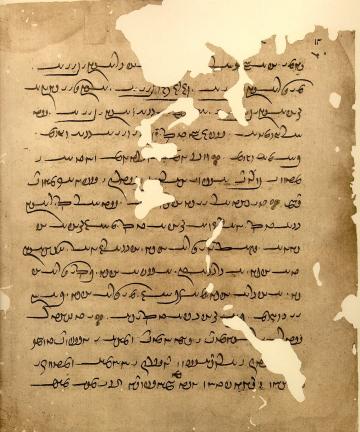 Avestan is the language of the earliest sacred texts belonging to the Zoroastrian religion. The Avesta was handed down orally among Zoroastrian priests for more than a thousand years, and when it was committed to writing, probably for the first time during the Sasanian period (3rd - 7th centuries AD), a special alphabet was devised to record the traditional pronunciation of its language. The oldest Avestan compositions are seventeen intricate poems (Gathas) attributed to the prophet Zoroaster (Avestan Zarathushtra), and some prayers which play an important part in Zoroastrian worship to this day. There is also an ancient liturgy (Yasna Haptanhaiti), and long traditional hymns of praise (Yashts) addressed to deities such as Mithra and Anahita, which contain the earliest known fragments of the Iranian epic. The Videvdat, or "Law which rejects the false gods", spells out in late Avestan prose the Zoroastrian regulations concerning pollution through contact with Evil.

The Avesta is authoritative for present day Zoroastrians, and there is considerable interest in the contribution modern scholarship can make to its correct interpretation. When the Avesta was first translated and introduced to the West in 1771 by Anquetil Duperron it was greeted with various shades of incredulity by Kant, Voltaire, William Jones and others. Since then considerable progress in understanding has been made via philological and historical linguistic methods, but much work remains to be done, and the early stages in the development of Zoroaster's religion are still the subject of lively academic debate.

Avestan may be studied alongside Old Persian, the two representing Old Iranian, the most ancient recorded stage of the Iranian language family. They may be studied together as an 'additional language' with Sanskrit, Persian, Classics, or Egyptology and Ancient Near Eastern Studies. Old Iranian texts are studied both as linguistic documents, and as sources for the history, religion and culture of Ancient Iran.