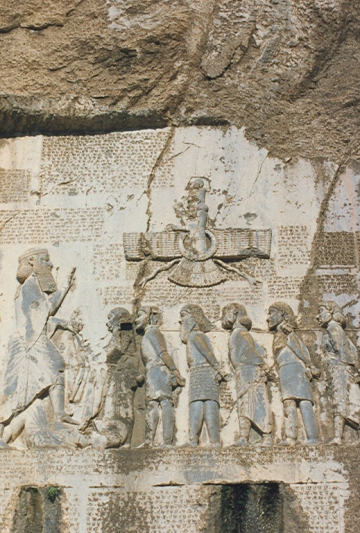 Old Persian is the distant but direct ancestor of present day Persian (Farsi). It was the native language of the Achaemenian Kings of Iran (6th- 4th centuries BC), who employed it in their monumental trilingual inscriptions, written in a simple cuneiform script.

The major Old Persian inscriptions are important historical documents which may be compared with accounts of the Persian Empire in Greek sources. The longest inscription, which is chiselled on the rock face at Bisitun, tells in Darius the Great's own words how he seized power and established his rule over vast territories. From the palaces at Susa and Persepolis, and the Achaemenian tombs at Naqsh-i-Rustam, come other inscriptions dealing with politics and religion, including Xerxes's "daiva inscription", which bans the worship of false gods and promises rewards to the worshipper of Ahura Mazda.

Old Persian may be studied alongside Avestan, the two representing Old Iranian, the most ancient recorded stage of the Iranian language family. They may be studied together as an 'additional language' with Sanskrit, Persian, Classics, or Egyptology and Ancient Near Eastern Studies. Old Iranian texts are studied both as linguistic documents, and as sources for the history, religion and culture of Ancient Iran.